Some functions of this site are disabled for browsers blocking jQuery.
Skip to main content
MENU

Official Website of Michigan.gov
THE OFFICE OF
GOVERNOR GRETCHEN WHITMER
Gov. Gretchen Whitmer
You are here

LANSING, Mich. -- Governor Gretchen Whitmer and Governor Mike DeWine of Ohio placed a friendly wager ahead of the rivalry football game between the University of Michigan and the Ohio State University, commonly referred to as "The Game."

"This football game is a time-honored tradition between our two states that pits the best we have to offer against each other for four quarters," said Governor Gretchen Whitmer. "That's why I'm joining Governor DeWine to bet some of the best Michigan-made sweets and treats that our state has to offer from Cherry Republic. With everything on the line for a trip to the Big Ten Championship game, I can't wait to cheer on the Wolverines. Go Blue!"

Governor Whitmer has wagered a gift package of famous Michigan-made cherry sweets and treats from Cherry Republic in Glen Arbor. In 2019, Governor Whitmer bet a box of goodies from Zingerman's in Ann Arbor.

"With so much on the line in this year's edition of The Game, Fran and I are very excited to see the Buckeyes kick-off on Saturday and continue their great rivalry" said Governor Mike DeWine. "I am proud to engage in this friendly bet, highlighting some of Fran and my favorite treats from across the Buckeye State that we know many Ohioans will be enjoying as they cheer the Buckeyes. O-H!"

Governor DeWine has bet an assortment of Ohio-made sweets, including cream puffs from Schmidt's in Columbus, black raspberry chip ice cream from Graeter's in Cincinnati, chocolate-covered pretzels from Malley's in Cleveland, and buckeye candies from Marsha's Homemade Buckeyes in Perrysburg. Governor DeWine also wagered a basket of Ohio's famous buckeye candies in 2019.

On Saturday, November 27 at noon, the University of Michigan Wolverines will face the Ohio State University Buckeyes for the 117th meeting of "The Game." Michigan leads the head-to-head series overall 58-51-6, but Ohio has won the last eight games.

Governor Whitmer is the proud mother of two students at the University of Michigan. 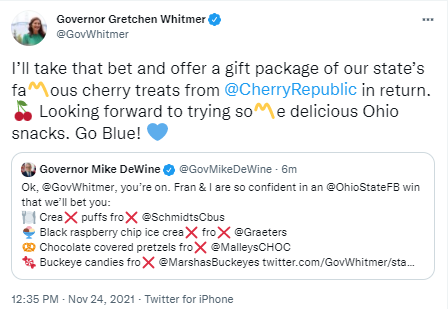 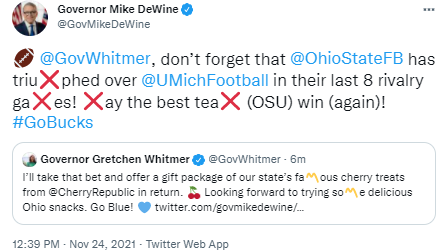